Grand Teton National Park, established in 1929, is part of the Greater Yellowstone Ecosystem.  While Yellowstone was the first National Park, Teton is special in that its establishment was influenced by many different locals who truly appreciated the area and wanted to preserve the wildness of the Tetons.

In the early 1920’s, residents began noticing that development around Jenny Lake was starting to invade the Tetons.  In 1923, locals met with then superintendent of Yellowstone at Maud cabin to start a conversation about preservation in the Teton Range, eventually leading to Grand Teton National Park being established in 1929. Public influence does not stop there: When Congress established the park in 1929, only the high peaks and a few lakes were preserved.  Meanwhile, John D. Rockefeller, owner of JY Ranch (the first dude ranch in Jackson Hole) began purchasing land in the valley in an effort to conserve even more land. Though he had to fight much public opposition from people who worried they would lose access to Jackson Hole, Rockefeller eventually persuaded President Franklin D. Roosevelt to step in to help protect 221,610 acres of the valley.  The Rockefellers loved the JY Ranch, though, and John D. held on to it and eventually passed it on to his son, Laurance.  In 2007, Laurance Rockefeller passed the land to the people, and the JY Ranch became the Laurance S. Rockefeller Preserve. 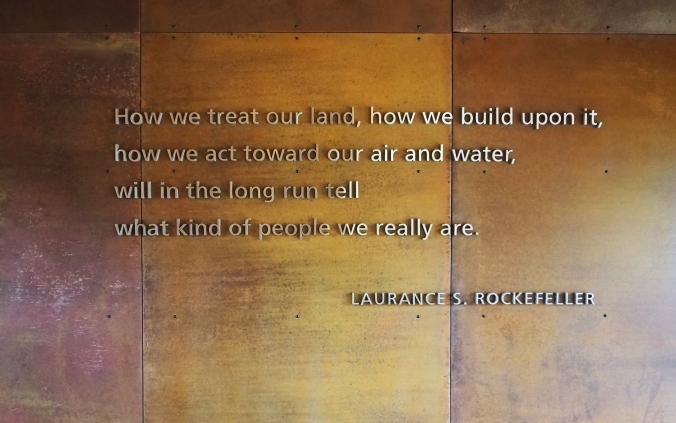 The Muries were yet another influential family in the area. They moved from Alaska and bought a ranch in Jackson Hole in 1945.  At the Murie Ranch, conservationists often met to crusade for the wilderness.  Their work led to the wilderness act of 1964, which officially defined wilderness as “an area where the earth and its community of life are untrammeled by man, where man himself is a visitor who does not remain.”

Many of the potential plans we made for the Teton Range could not be carried out due to—you guessed it—SNOW in the mountains. We had bought ice axes for just such an occasion, but the rangers at Tetons advised us not to rely on them as we had not practiced with them. Damn Minnesota for not getting snow this past winter!  Wyoming, on the other hand, received record amounts of snow. Per the ranger’s recommendation, we reserved a campsite on Phelps Lake for two nights starting the following day.

On this first day in the Tetons, we day-hiked as far up Paintbrush Canyon as we could via the Leigh Lake trailhead.  We were able to reach the first two campsites, from which we took in a tremendous view of the distant peaks. 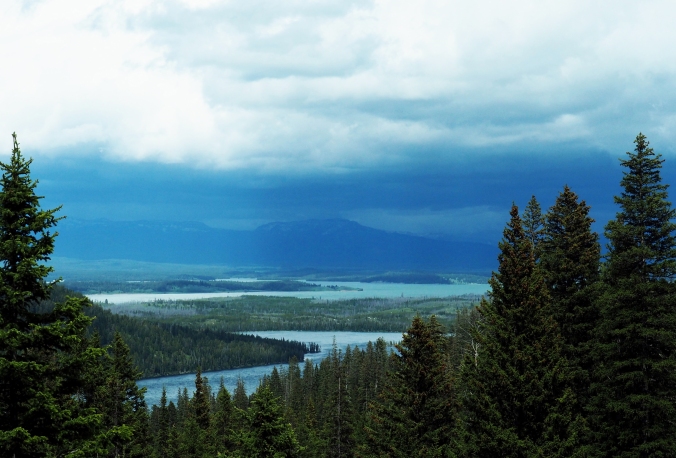 We begrudged the ranger (not to her face) for not recommending camping at Paintbrush Canyon, but I could never stay mad at a ranger for too long. And indeed, the next one we talked to saved our asses.  She told us about Shadow Mountain—a nearby mountain which is situated in the neighboring national forest and is chock-full of free campsites!  It turned out to be a popular place and we had to drive a third of the way up it in the rain with a malfunctioning windshield wiper.  Finally making it to a spot, Stephanie managed to repair the wiper while I cooked pea soup in the rain. I got soaked cooking outside, and after gobbling down my soup, I changed to dry clothes and refused to leave the funbus until morning, despite a nagging desire to pee. By morning, the skies had cleared and the view from Shadow Mountain was phenomenal.

Today’s challenge would be driving down the steep, winding slope in pure mud. We saw a jeep just one campsite up form us get quite stuck. In case you didn’t already know, my girl is kind of a badass. She got us down the muddy mountain, no sweat.  We then drove to Death Canyon trailhead, which was also a mudding adventure, and departed on the trek to Phelps Lake.

After setting up our tent on the beautiful lake, we day-hiked up Death Canyon. We saw some beautiful rocks and trees on this hike, but barely made it to the canyon before reaching a big snowy pass which sloped toward a treacherously fast-flowing creek. We turned back at this point.

On day three, we hiked from our campsite around Phelps Lake to the Laurance S. Rockefeller Preserve.  The visitor center is stunning.  At 9:30am we went to the ranger talk.  The ranger’s theme for the day was “inspiration”. He had a lot of neat things to say.  My favorite take-away was to pay attention to the little things.  He had us team up with a stranger and place a small rectangular frame on the ground, get out a microscope, and see what we found in the micro world. He also slowed down at one point and asked us to walk quietly and listen to the birds. Sometimes we get so caught up with thoughts in our head that we forget to turn it off and practice mindfulness. 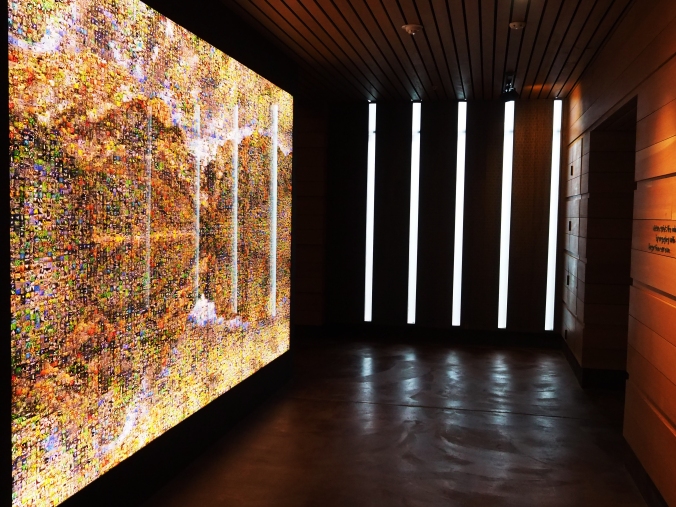 We stayed one more night at Phelps Lake. I loved the lake itself, but boy was it busy!  I wished we were off in some canyon away from all the people!  I was surprised how much wildlife we saw there. That night, a mule deer walked through our camp, eating freely and not seeming to mind our presence. The next morning, a marmot walked into our site as if it owned the place. 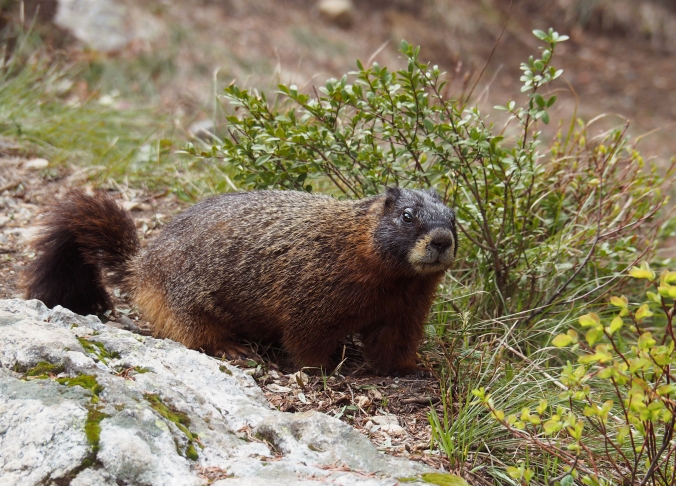 And finally, on our hike out, we saw a black bear!  The bear was headed toward the lake. We stopped and waited until it was a good distance away from us before departing down the trail in a different direction.

I guess Stef thought I was the bear

Traffic Jam on the bridge (Goat and caterpillar)

After hiking out, we learned, as we had suspected, that the hike we planned to do in Bridger Teton National Forest was too snowy to attempt.  So, we headed to the visitor center and did some research, finding an alternative hike at a lower elevation.  Since this hike was only two days instead of four, we spent an extra day in the valley and another in the town of Jackson.  At Grand Teton, we visited the Menor’s Ferry Historic District, which was amazing.  Menor’s old general store took us back into the past, where we bought homemade old-style huckleberry soda and were given a cookie baked on the wood-burning stove. 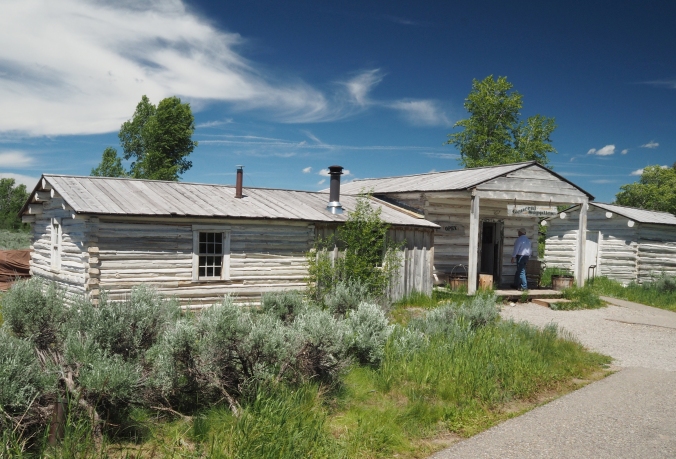 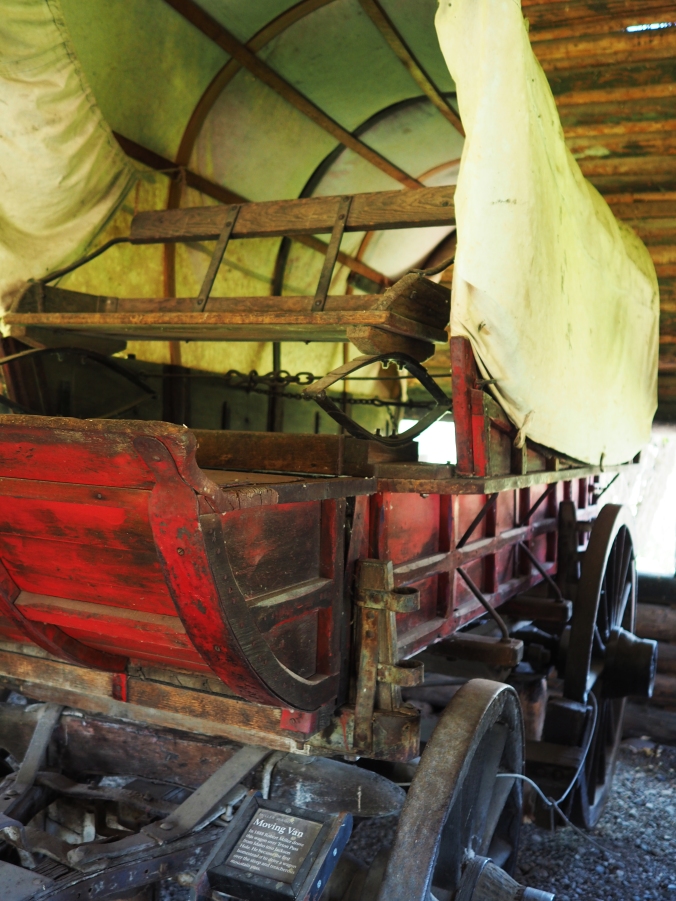 At this site, we also visited the Maud cabin (where locals had met in 1923 to establish the national park), after which we saw a bull moose behind some nearby trees!  We approached quietly for a photo.  At one point, he looked up at me, and I decided it was time to back away slowly. I had no desire to disturb Mr. Moose.

The last building we visited on this site was the Church of the Transfiguration—a beautiful church with a great mountain view. 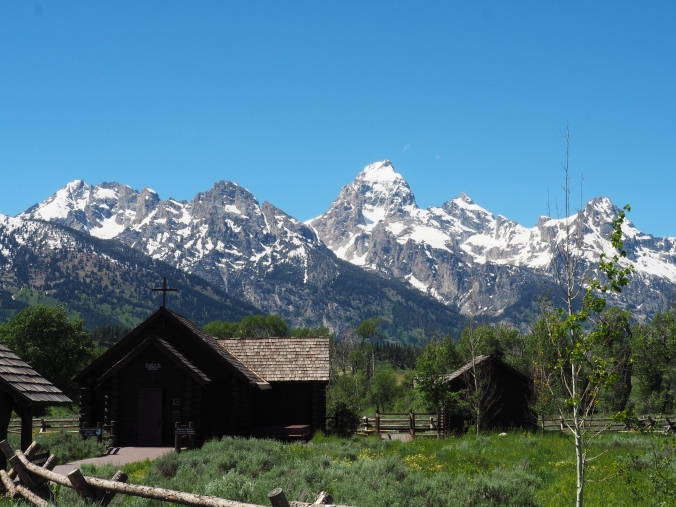 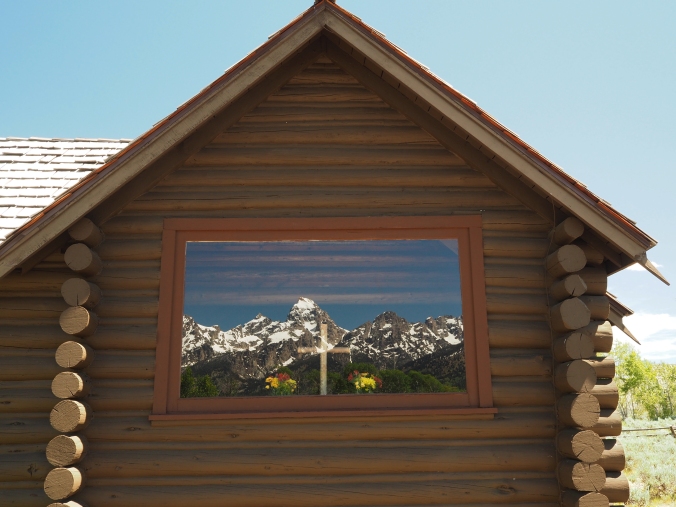 Reflections at the Church

That night, we returned to Shadow Mountain to camp, where we befriended some locals at the next site.  They were ski-bums who had moved to Jackson six months ago to work at the slope. For the summer, they were working at Snake River Brewery which they highly recommended.  They also recommended checking out Teton Village and Jackson Hole Mountain Resort.

The next day, after checking out the tourist shops and buying an old west hat, we coincidentally (or not), ran into the ski-bums at the brewery!

We drank a beer with them, during which time they informed us that there was free beer and cheap tacos at a park in the town of Wilson. We headed there immediately after, and learned upon arrival that it was a solstice party!  We were too late for the free beer, but got free wine and a $2 taco.  It sure pays to befriend locals!

On our last day in Jackson, we visited Teton Village, then we headed south to the national forest for our newly chosen hike: Willow Creek. Though the signs and the trails were ambiguous, this turned out to be the best hike all week! 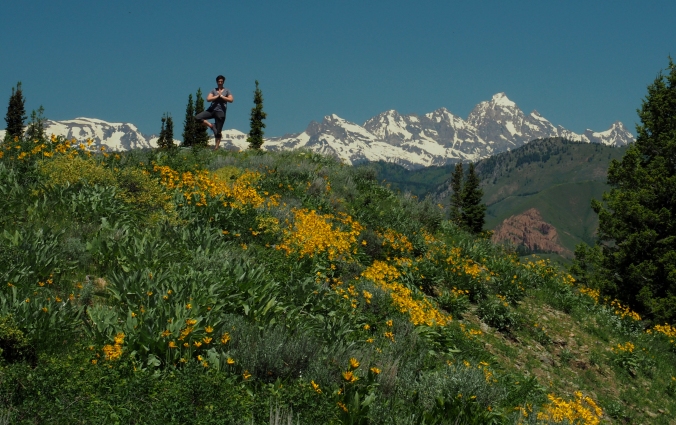 We saw very few people here, and most we did see were on horseback.

We hiked across Ann’s Ridge which was absolutely breathtaking. 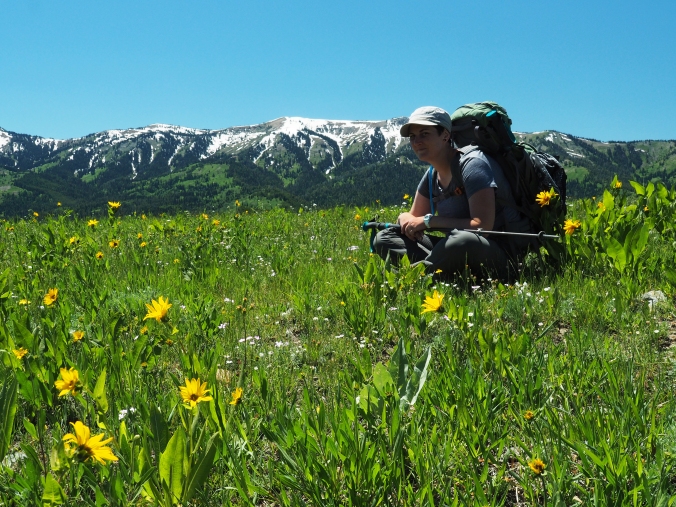 We couldn’t cross Willow Creek as planned due to high waters, but we base camped near it. It was a beautiful site; the only problem was that a damn ground squirrel who was not afraid of humans ended up chewing holes in Stephanie’s water filter.  We were able to repair it with duct tape. 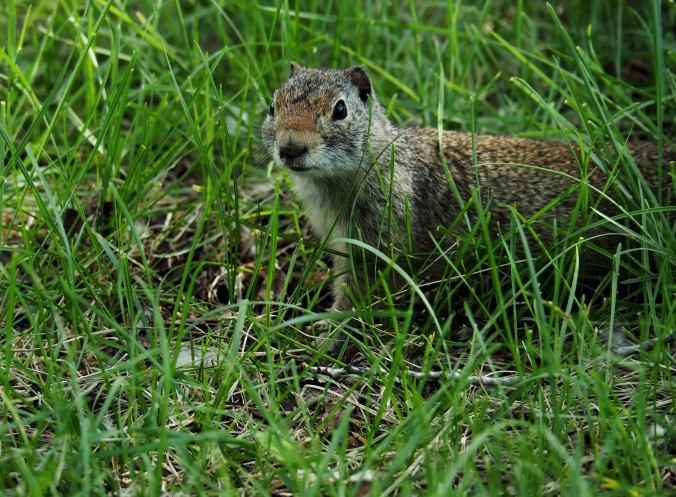 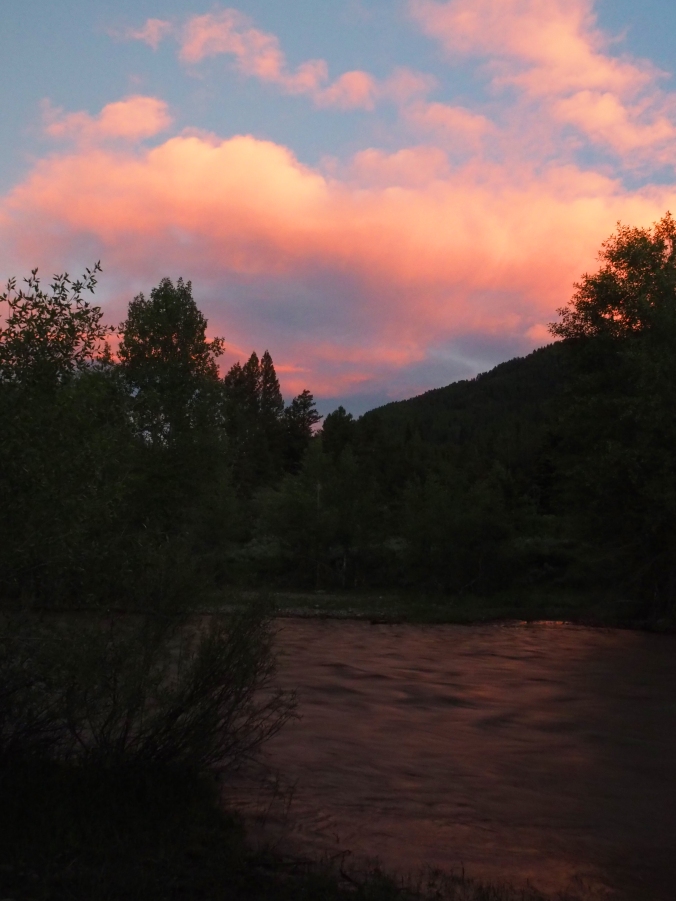 This was a lovely place that I could have spent much more time in.   National Parks are amazing, but you can’t beat the solitude of national forests. 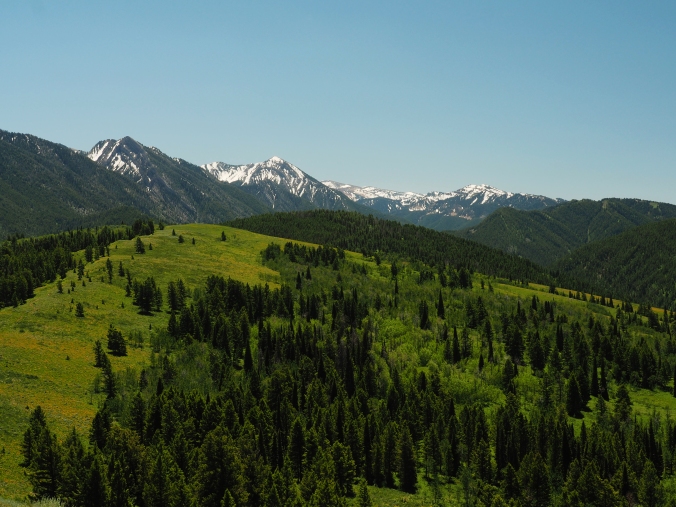 The Teton Range is a beautiful place packed with fascinating history. It demonstrates how small groups or even individuals can make an enormous difference for conservation.  Some made a difference through their wealth, others through their passion.  Whatever your tools, you can use them to fight for a wild place that you love.

One thought on “Wilderness for the People, by the People: Grand Tetons”